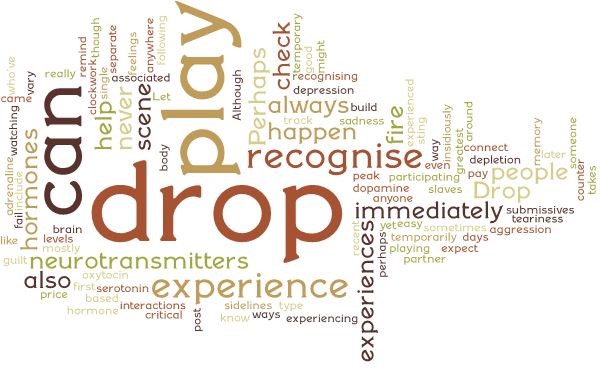 ‘Drop’ is the depletion of hormones in the body and neurotransmitters in the brain after a peak in levels during play. They include adrenaline, oxytocin, dopamine and serotonin. Although mostly associated with slaves and submissives, anyone participating in play can experience drop (even sometimes those watching on the sidelines)

The single greatest way to counter drop is to recognise what it is, and where it came from. Perhaps because these hormones have interactions with memory, it is all too easy to fail to connect feelings of depression, guilt, sadness, being down, teariness, aggression with recent play. Drop can happen anywhere from immediately following a scene, until days later. Some people never experience drop, some can track it like clockwork. Perhaps more insidiously, drop can vary based on the type of play. I’ve had people who’ve never experienced drop before, and yet they do with fire play. Or always experiences drop before, but not with fire play.

It is critical to first recognise drop as it immediately takes the sting out of it by recognising it’s temporary, and it’s perhaps the ‘price you pay’ for a really good scene. There are also ways to build your hormone and neurotransmitters up temporarily to help through drop (a separate post), but they don’t help until you recognise it. Have someone around who you check in with who can remind you that you might be experiencing drop. Let them know you’re playing and what to expect. This could be a partner (though be aware they may also miss it if going through the same experience after the same play), or a trusted friend/family member. Or, set yourself an alarm to check in on yourself.

Remember these are completely natural experiences, they will pass, there are things you can do, and it won’t always happen to you.